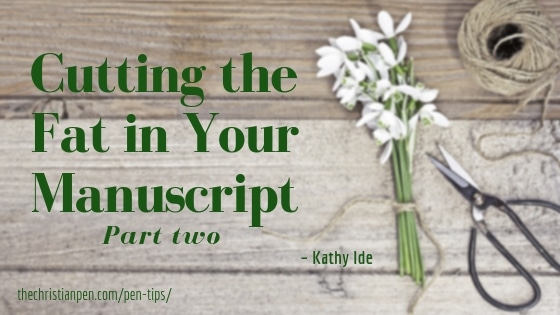 Following on the heels of last week’s column, here are more ways you can tighten your manuscript.

Cut out unnecessary words. For example:

She nodded her head. (What else would she nod? Of course it’s her head)

I thought to myself. (Who else can you think to?)

He paced back and forth (ever seen anyone pace up and down?)

“He looked at his image in the mirror”

“There are four procedures that must be followed”

Cut out “relative structures” whenever possible. For example:

The child who was disabled … (The disabled child …)

Cut out words that don’t add anything to the sentence. Examples: just, quite, that, very, well

If a word can be eliminated without altering the meaning of the sentence, delete it.

Eliminate adverbs and adjectives that don’t add anything new. For example:

Don’t use too many adjectives or adverbs, especially all at once. Readers don’t need to know that the couch was a six-foot-long wing-backed-style sofa with a black-and-yellow-checked 1950s-pattern cut from coarse Kentucky linen. If all of those details are important, spread them out. Show the character sitting on the six-foot-long sofa and running her hands over the black-and-yellow-checked upholstery. Reveal memories of her childhood, back in the 1950s when her parents first bought the couch, how the coarse Kentucky linen scratched her little legs. Back then she’d felt dwarfed by the huge wing-backed monstrosity. Now she’s resting her head comfortably on the high back.

Don’t use more than two adjectives or adverbs together. Example: “The cold, gray, sterile, hard concrete walls closed in on Jack, making him feel lost, hopeless, helpless, buried, lonely, alone, and abandoned.” Too many modifiers will make the reader think you couldn’t decide on the right word so you just threw in a bunch. Instead, choose one or two of the most important ones.

Don’t use two words that mean basically the same thing.

For example, instead of “She struggled with deep, intense feelings and emotions of anger and wrath,” choose deep OR intense, feelings OR emotions, anger OR wrath.

Cut out anything that states the obvious.

Don’t tell your readers what they already know, don’t need to know, or can infer on their own.

Don’t tell your readers things that are obvious to the general public (or would be common knowledge to people in your target audience). Watch for sentences that start with phrases like, “As we all know . . .” If we all know, you don’t need to point it out.