Dear Editor: Where Do I Add a Comma? (Part Two) 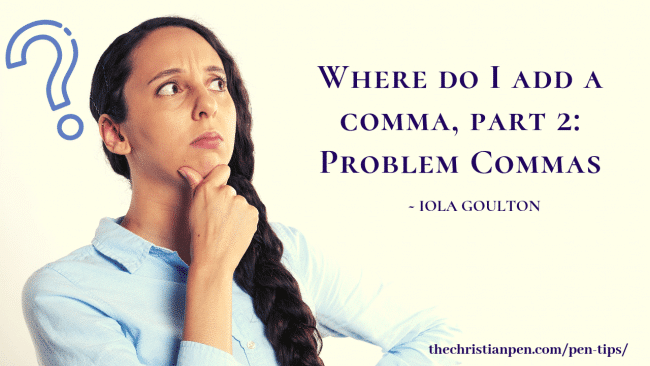 The comma is one punctuation mark which even editors don’t agree on. In my last post, I introduced two basic rules of commas, and looked at how we use a comma in a compound sentence.

Today we’re discussing the Oxford comma (also known as the serial comma) and other problem commas.

I’d like to thank my parents, Mother Teresa and the Pope.

This implies my parents are Mother Teresa and the Pope. That’s obviously wrong, which is why this is the perfect example of why I’m #TeamOxfordComma—for clarity.

I’d like to thank my parents, Mother Teresa, and the Pope.

The Oxford comma makes it clear that I’m thanking four people. However, not all writers or editors agree. Even the two major style guides don’t agree:

So not using the Oxford comma isn’t wrong. But I think it’s easier to use the Oxford comma consistently. Otherwise writers and editors have to consider when it’s needed for clarity and when it isn’t.

Comma After So
That last paragraph leads to my next question: should there be a comma after “so”? I could have written:

So, not using the Oxford comma isn’t wrong.

Some people justify adding a comma after “so” by saying you should add a comma where you’d normally take a breath when reading aloud. That advice is incorrect: the rules for commas are based on how we write, not how we read or speak. (Remember the Shatner comma?)

When is it correct to use a comma after “so”?

So, I ask you, does this help?

“I ask you” adds to the sentence but could be deleted. The comma after “so” is therefore correct.

In my next post, we’ll discuss another problem comma: commas with coordinate adjectives.

Iola holds a degree in marketing, has a background in human resource consulting, works as a freelance editor, and has developed the Kick-Start Your Author Platform Marketing Challenge, an email course for authors wanting to establish their online platform.

When she’s not working, Iola is usually reading or writing her next book review. Iola lives in the beautiful Bay of Plenty in New Zealand (not far from Hobbiton) with her husband, son, and cat. Visit her on social media: www.christianediting.co.nz,  https://www.facebook.com/christianediting/, and https://twitter.com/iolagoulton.

« 2019 EIE Finalists » Turning That Sermon Series into a Book