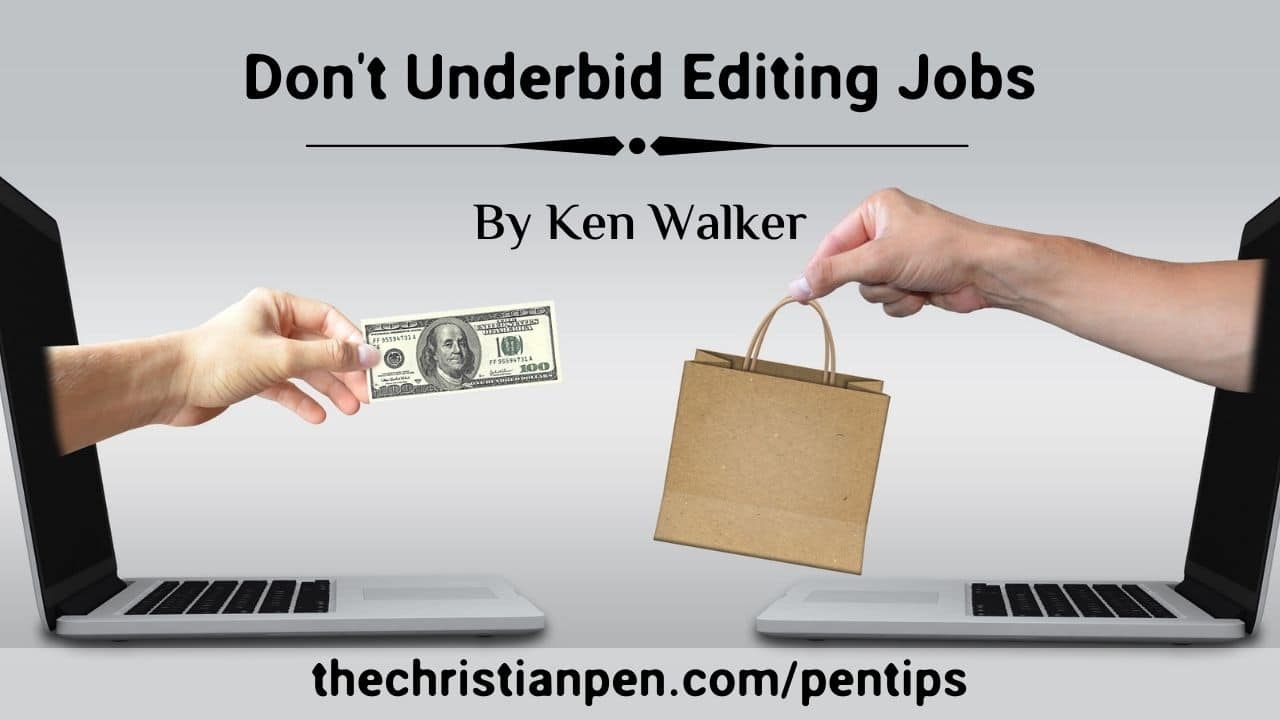 As every freelancer knows, time is money, which is why editors can’t afford to give too much of it away.

Despite my awareness of that fact, last year I made one of the biggest mistakes of my career by woefully underbidding a book editing job. I chalk it up to sympathy for the author, who had been working on her manuscript for two years and been ill-served by her first editor.

Among other things, that person had done a poor job minimizing the use of passive language, failed to research certain points, and left the endnotes in one big pile. No chapter divisions, just consecutive numbering for dozens at the end.

Since the author was referred through a client, and it looked like she would have to self-publish, I offered to do the job for less than half what I estimated it would take.

Now, she didn’t come hat in hand, pleading poverty like some authors; I made the offer of my own free will. Indeed, our relationship remains intact, and I hope her book does well.

Still, if there was anything positive to be gained from this experience, it’s to avoid undercutting myself again. A few other specific points I learned:

* Thoroughly review a manuscript before going ahead with it.

I did do a sample edit on part of one chapter and sent those comments to the graphic designer (an acquaintance of a client), but I didn’t look closely enough at the endnotes.

Had I reviewed a chapter’s worth, I would have seen that about 90 percent of them were done incorrectly for a trade book. They were in an academic style with last name first, often failed to cite the article title, and had numerous hyperlinks listed incorrectly. Later, making the numerous corrections needed gave new meaning to the word, “painstaking.” So was inserting breaks throughout the manuscript in order to get the endnotes for each chapter to start over again at 1.

* Keep the big picture in mind.

One reason I went ahead with this book was the unexpected collapse of another ghostwriting job. However, soon after I started on this edit, another opportunity arose.

When it came time to start on the new ghostwriting task, I had to postpone its launch because I was frantically trying to wrap up this edit. In addition, waiting in the wings was another book the author wanted revised and updated. Poor planning on my part.

* Don’t create stress for yourself.

Not only did this time-consuming edit take as much time as I had forecast (actually, a bit more), knowing it was creating modest income meant I needed to keep numerous other projects rolling. The combination of modest revenue and the corresponding need to keep other things going to make up for it left me feeling like I lived in a pressure cooker. While I survived, I also learned that I can’t afford to do cut-rate work when I need to be producing income.

Because our time as editors is valuable, we cannot afford to waste it. Don’t get trapped by pressure, from within or without, to underbid a project. When you do, other pressures can easily come into play. In the end, it does no one any favors, especially you.

« Why Editors Need Writing Conferences » Getting to Know CEN’s PENCON