As one familiar with fluctuating income, I know how challenging it can be to be grateful when the roller coaster takes a dive. That’s what happened after I completed a time-consuming developmental book edit at the end of January.

At first, I wasn’t too upset. I had completed that project on the heels of another two-month developmental edit. These two jobs wore me out; it took several weeks to recuperate. Plus, the week mid-February’s triple ice-and-snowstorm package left our home without electricity for five days, I was delighted to not have many deadlines on my plate. Still, on the last Monday of February as my wife and I finished morning devotions, I prayed, “Lord, I could use a couple more paying jobs this month.”

That afternoon at 2:00, an editor emailed to ask if I could write a rush story on some disaster relief shipments going into Texas. She needed it in 48 hours, but it would pay twice their normal fee. I jumped online to do research and connected phone interviews with two of three people I hoped to reach. By 6 o’clock I had the rough draft finished. After a few minor revisions the next morning, I was done. Because the group went to electronic payments during last year’s lockdowns, I also had the money in a week.

While the speed with which that work showed up impressed me, more was on the way. On Thursday afternoon, I received an unsolicited email from an author who had published a couple books through Amazon’s book division. Now he wanted one of them professionally edited. I told him I had the time to work on it. We talked Friday afternoon, he sent me the files, and after a sample edit we were off and running. Not only will the manuscript be finalized soon, he and I worked well together. I thoroughly enjoyed editing his book.

In addition, a couple hours after this author and I talked, another editor emailed to ask if I could tackle a writing assignment for a new quarterly magazine. Although I would only have a couple weeks to pull it off, I had the flexibility. A few minutes after asking for details, he called on Facebook, saying he thought it would be simpler to have a quick discussion.

Since then, more unexpected work has appeared. In early April, a ghostwriting project I expected to start on suddenly vanished. The same day, an editor I had worked with in the past called to ask if I had time to help her with a rush project. “I do now,” I replied. In addition to the income, it was one of the most enjoyable assignments I have worked on in recent years. Work I wouldn’t have been able to do if I had started that ghostwriting job.

The moral of the story: editors, whenever you face fear-inducing slowdowns in work or income, remembering that God is in control will help calm your nerves. 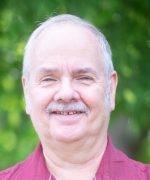