We editors should proclaim, “No, they’re not.”

Simple. So why do many writers ignore these rules?

The current capitalization chaos may have been passed down to us unintentionally by our forefathers. In centuries past, writers used initial uppercase letters to emphasize and embellish. Thomas Jefferson began the Declaration of Independence this way: “When in the Course of human Events, it becomes necessary for one People …”

Authors, bloggers, and tweeters worldwide have revived this outdated practice. Who’s to say what should be capitalized? If I believe chocolate deserves proper noun status, why should it remain common? Chocolate holds a lofty position in my world, far above any other confection. That iconoclastic mindset leads to the capitalization of words such as patriotism or democracy. Christian writers often capitalize nouns they value: cross, truth, and believer.

Several other capitalization dilemmas plague Christian writers. For example, heaven identifies a particular place—as does hell. Should they be capitalized? The Chicago Manual of Style, Merriam-Webster Dictionary, and The Christian Writer’s Manual of Style (CWMS) say no.

CWMS devotes fourteen pages to “Capitalization of Religious Terms.” Some of its recommendations surprised me: chosen people (Jews), church (body of Christ and a local congregation), the devil (Satan), and the exodus (from Egypt). Also unexpected were garden of Eden, ark of the covenant, and gentile. Other words remain uncapitalized: temple, tabernacle, patriarch, and magi.

Many Christian writers capitalize pronouns that refer to God—such as He, His, You, and Me. But most publishers, Christian and secular, discourage this practice. The running text may conflict
with Scripture quotations if the Bible version cited doesn’t capitalize the pronouns. Some readers, unfamiliar with this means of honoring God, may be more confused than enlightened by the uppercase letters.

The deity pronoun issue becomes more convoluted in novels. Should the pronouns be capitalized regardless of who’s speaking—atheist, skeptic, or Christian? To avoid confusion, editors should recommend lowercase pronouns in dialogue and narrative.

Capitalization is a helpful tool, but let’s defer to style manuals and the dictionary on proper usage. Since the goal of writing is clear communication, nouns should remain unequal. Sorry about that, Thomas Jefferson. 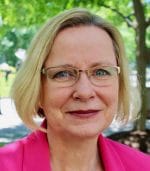