International Characters and Setting in Fiction 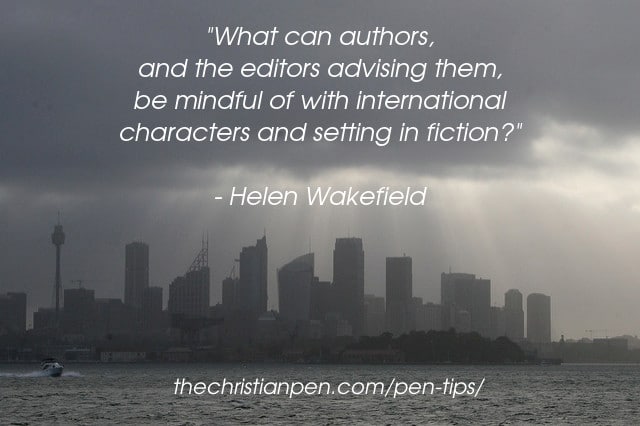 Authors and readers alike enjoy the element of romance and excitement that international setting and characters can bring to a novel. If the author has lived in that country, they have the advantage over other writers.

Even if the author hasn’t been to the place they’re writing about, the internet enables them to do the next best thing. You can find out so much online using maps, forums, travel sites, satellite imagery, and databases.

But even with these resources available, too often international characters and setting miss the mark. Some by a long shot.

I’ve been a disappointed reader more than once at the mishandling of Australian characters and setting by international authors. At times, it’s almost insulting. But mostly, it’s frustrating. And am I likely to pick up a book by that author again? It’s doubtful.

When an author creates inauthentic international characters and setting, they run the risk of alienating a large sector of their readership. Additionally, upset readers are more likely to write a negative review.

So what can authors, and the editors advising them, be mindful of with international characters and setting in fiction? Below are three areas that seem obvious enough, yet are often incorrectly portrayed.

Incorrect use, or overuse, of jargon/slang/lingo

Overuse of slang is a common problem. It’s so easy to look up common phrases online and inject them into dialogue. But peppering your character’s greetings with “G’day” does not make them an authentic Aussie. You might be surprised that most Aussies, including me, don’t say “G’day.” It depends what type of character they are, and where they live. All countries have their regional and demographic differences.

Some phrases featured on slang lists are outdated and no longer in common use. Some are used by older people but not by the younger crowd. Use what is relevant for the time period, and for the age of the characters.

One thing to be especially careful of in Christian fiction is the acceptability of a phrase. One American author had a Christian Australian character who used an expression that is considered vulgar. She was embarrassed when I pointed it out, but we caught it before it went to print.

It’s pretty easy to remember that countries in the opposite hemisphere have opposite seasons. But it’s not as simple as that. Weather conditions vary from place to place within countries. Some places don’t snow in winter, some have summer heat five months of the year. Use weather services online to check the specific temperatures and conditions at locations for the relevant time of year.

In one novel I read, an Australian character took a convoluted route (not for the sake of the plot) to a famous landmark in the U.S. I only noticed because my mother had recently been there. It was pretty obvious the author had looked at a map online, noticed a nearby airport, and directed her character from there. But it was not the most direct or normally used route.

I’ve also read books that completely disregard a change in which side of the road the cars drive. It may not affect the mechanics of getting from A to B, but it’s usually a significant part of the character’s experience.

So, what’s the best thing authors can do to help create authentic international characters and setting?

The factors listed above, and innumerable others not mentioned, can be avoided by asking the right people. The internet provides a lot of great information, but is no substitute for the insight and experience of someone local. Who should you ask? A variety of people who are:

As editors, we should keep in mind how easy it is to misrepresent international characters and setting. So flag anything that doesn’t seem quite right, and urge your clients to check and verify with the right people. They’ll gain more fans if they do!

Helen Wakefield is an Australian freelance editor specialising in fiction. A romantic at heart, she has a particular interest in Christian romance and sweet (clean) romance. She is passionate about helping writers create fabulous and engaging stories with dynamic and authentic characters. Proud of her millennial status, Helen understands what appeals to readers in the 20-35 year age bracket. She assists international authors create true-blue Australian characters and setting through her Authentic Aussie service. Connect with Helen on Facebook, Twitter and at www.helenwakefield.com.