Readers Are Blind—Editors Give Sight 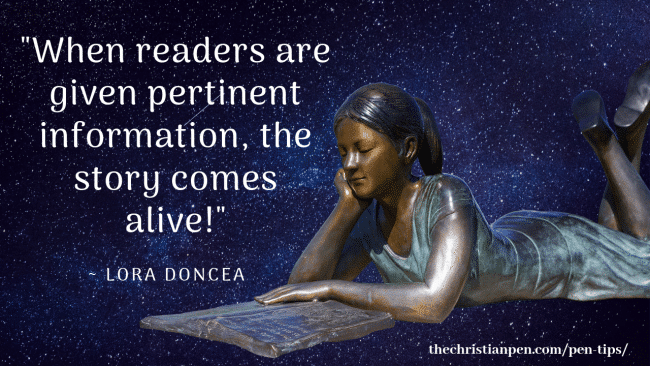 One of the most prevalent problems I see in fiction is that writers forget that readers are blind and deaf to the worlds the writer envisions. Readers have to create the scenes using only the words they read, and writers often give them very little to work with.

Example of first lines in a story:

Who are these people? Where are they? What is the scenario? Here’s what I envisioned as the writer:

“Get in there—now!” Six-year-old Billy ordered his little sister into the fort of cushions.
“I won’t!” Suzie yelled, hands on her hips.
He aimed his neon-green squirt gun at her forehead. “I’ll kill you!”
She flung her body into his. “No, you won’t.”

Is that what you imagined? Probably not! I didn’t give you enough information to see the scene accurately.

In real life situations, our brains instantly capture these details:

* Where we are, what time of day it is, what season it is
* Who is in the vicinity
* Height/build/approximate age of each person
* Body language
* Skin color
* Hair color and length (facial hair on men)
* Eye color and facial features (when close enough)

These details need to be given to the reader exactly as we’d see them in real life.

The Arizona sun had sunk below the mountains hours ago, but its furious heat still simmered on the sidewalk. During the summer, Janie waited till night to get her mail, but she still broke a sweat walking to the community mailbox. Her flip-flops slapped the pavement as she pulled her long hair off her neck.

She turned the corner by the streetlight and abruptly froze. A few yards away, a burly man with dark hair and a thick beard leaned against the silver mailbox. Her gut clenched a warning. People often said that with her slight build, she looked more like a teen than a twenty-five-year-old. He took a slow step toward her, and her heart raced. What to do?

A familiar male voice yelled from behind, “Janie, wait up!”

She turned, exhaling in relief. Her neighbor Max caught up to her, grinning, the sheen on his dark athlete’s body glistening.

“Hi, Max.” She glanced up at him, then whipped around—the stranger was gone.

As soon as possible, we need to describe what Janie looks like. She wouldn’t describe herself in her own POV (except I snuck in her age and build), but at the start, we need a clear visual of her.

It’s also critical to prepare readers for the type of voice they’ll hear when someone speaks. In the example above, “A familiar male voice” prepares us to accurately hear the next words. It’s too late to write voice inflections and if it’s a male or female after the words. “I don’t know who you are or what you want,” the old lady shrieked. Too late—I heard a male voice.

Editors: Help writers by inserting all of the critical details readers need to envision each character and scene accurately. When readers are given pertinent information, the story comes alive!

Lora thoroughly enjoys editing fiction and nonfiction books for Christian authors. She views editing as a ministry, partnering with authors to make their writing polished and successful. She also writes a blog of “Savvy Writer Tips” to help writers spot and fix common problems. Read them on her website: EditsbyLora.com or on Facebook: SavvyWriterTips. Lora’s varied life experiences help her when editing. She’s been a recorded Christian musician, a computer and web programmer, a college teacher, and a Bible study leader. She spent years oil painting and loves photography. She recently exchanged life in the big city for a cabin in the mountains where she savors gorgeous scenery, diverse wildlife, and peaceful times with family and friends.