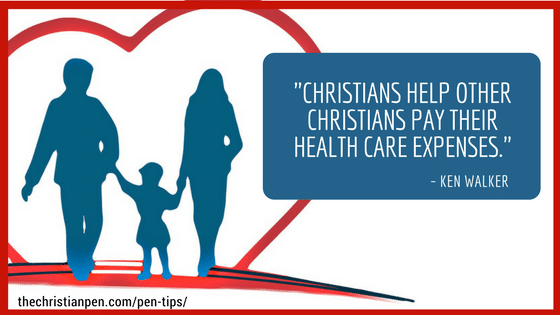 When I saw the flurry of news stories in late 2017 about healthcare insurance choices, I thought maybe I would be a bit late in blogging now about the wise alternative: Christian health cost sharing plans.

However, knowing that such decisions aren’t the sort of thing people make overnight, I think it’s a good time for those who aren’t part of one to start considering the idea. So many editors work on shoestring budgets that buying traditional health insurance when—for a fraction of the expense you can join a health cost sharing plan—simply doesn’t make sense.

My experience with them goes back more than 25 years. Wanting to see what kinds of alternatives existed after my wife left her full-time job, I checked with a plan affiliated with a national writers group (I’ve since let my membership in that group expire).

In chatting with a woman at headquarters, I asked if the plan would pay for an annual physical as a means of prevention. After she said no, I expressed my regret. I wondered aloud why healthcare insurance companies were content to pay for a heart attack, but not the care that could prevent one.

“I know what you mean,” she replied. “They’ll pay for my abortion, but not my birth control.”

That comment went through me like a knife. I decided that I didn’t care to participate in the traditional health insurance model because I knew most companies were similar.

That’s how I ultimately connected with the plan I used for a while before switching to another. I am not naming either because I don’t want to be seen as lobbying for any one plan; I’m just endorsing the idea.

All operate from the same philosophical foundation: Christians help other Christians pay their health care expenses. There are so many kinds of wrinkles, options and deductibles involved that there’s no way to give a simple rundown of any one plan.

But for the sake of comparison, over the years I talked to three different individuals who were self-employed. All were paying more than $1,100 a month for traditional health insurance, or close to four times what my wife and I were then paying for our sharing plan.

I have had personal interactions with three of the plans: Samaritan Ministries, Christian Care Ministry, and Christian Healthcare Ministries. A book about self-pay patients lists a fourth: Liberty HealthShare.

Most require members to affirm a statement of faith and have a pastor vouch for their church participation. They won’t share expenses that involve behavior that wouldn’t line up with Christian practice, like having an accident because of drunk driving.

Some people I’ve mentioned sharing plans to express reluctance to join because of the lack of a “guarantee.” Since these plans aren’t legally insurance, they can’t guarantee any expenses will be paid. However, over the years one of our plans paid more than $250,000 for cancer, heart surgery, and other major medical expenses. Kind of puts that concern to rest, wouldn’t you say?