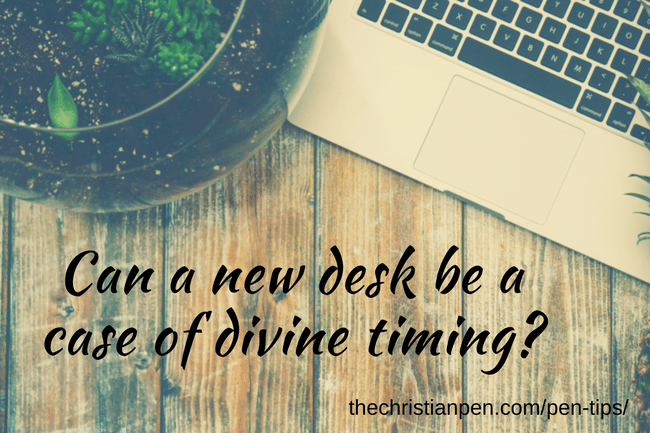 Last spring, I wrote a blog for Christian PEN about the mental benefits of a clean desk. Since that time, I have made another desk discovery: downsizing an antiquated relic in favor of an updated model has enhanced my productivity by forcing me to get more organized. The same may be true for you.

More than 30 years ago, I acquired my old desk when I learned of someone willing to part with a desk, desk chair, side chair and credenza for fire-sale prices. While the latter three had long since gone the way of the dinosaurs, the desk stayed with me through three moves and considerable changes.

It showed it, too. Several years ago, I had to take to carefully sliding the center drawer in and out of place after the front panel fell off, exposing nails on each side (fortunately, blunt side out). The desktop bore the scars of Xacto knife cuts when I forgot to put cardboard beneath whatever I was trimming, along with assorted white-out splotches and other stray marks.

A desk with a top that looks like slate caught my eye at an office products store about nine months ago. First, I had to make sure I had adequate reserves in my business savings account to buy it. Right before I did—a case of divine timing?—our oldest daughter gave me a discount coupon from that store that saved me more than $60.

Beforehand, I measured my old desk to make sure the new one would fit. It did; it had six inches less width and several inches less depth. In addition to the center drawer, it only had two drawers, compared to five in the old one.

I discovered the disadvantage to having so many drawers when I spent two hours cleaning out the old desk before two grandsons came over to haul it to the curb and assemble the new one. Namely, that I had taken to conveniently tossing way too many odds and ends into the drawers or onto a corner of the desktop.

In the center drawer, I discovered a five-year-old, dollar-off coupon for my favorite lunch spot. (Fortunately, they still honored it.) I found numerous stray business cards, some still of use but others that I tossed if I didn’t recognize the person whose name was on the card.

More importantly, I realized that I had slung stuff into drawers that would easily fit into my storage cabinet with office supplies, where they belonged. Old photos, envelopes and other minutiae wound up in places other than the desk because there wouldn’t be space for them in the new one.

My new desk forces me to take a minute or two to think about where things can be filed or stored—an organizational habit that has gravitated into my editing and writing work. If, like mine did, your desk looks like an antique, it may be time to discover a similar benefit to updating.