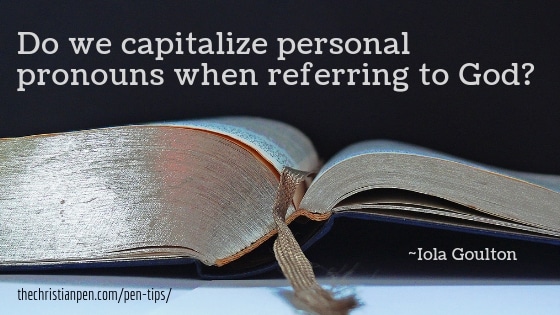 Do we capitalize personal pronouns when referring to God? This question came up in one of the (many) Facebook reader and writer groups of which I’m a member. My initial reaction was that it’s a yes/no question, so there has to be a “right” answer.

I was taught in school that we capitalize pronouns such as He, His, Him, and Your when referring to God. I was also taught that we use double quotation marks for speech (still true), single quotation marks for speech (now considered dated), and to add a comma where I’d add a pause if reading aloud (a topic probably best left for another blog post).

The group’s answers ranged across the spectrum: yes, always. No, never. Sometimes. It depends. So I checked my collection of style guides.

CMOS 8.95 says: “Pronouns referring to God or Jesus are not capitalized unless a particular author or publisher prefers otherwise.”

The New Oxford Style Manual (a major UK style manual), agrees: “Use lower case for pronouns referring to God where the reference is clear, unless the author specifies otherwise.” (p. 97)

Many Christian publishers use The Christian Writer’s Manual of Style, which takes a similar approach (p. 145): “Most publishers, religious and general, use the lowercase style … to conform to the two most popular versions of the Bible (the bestselling New International Version and the historically dominant King James Version).”

The Christian Writer’s Manual of Style says we don’t capitalize as a way to show respect or honor (despite popular belief). After all, we capitalize both God and Satan, yet only one deserves our honor.

CMOS also points out there is no true historical precedent for capitalizing. William Tyndale (translator of one of the earliest English Bibles) didn’t consistently capitalize God, let alone He or Him (or he or him). Neither Hebrew nor Greek distinguishes between lowercase and capital letters the way English does, so the original Scriptures provide no guidance.

What The Christian Writer’s Manual of Style does say is this: “[Capitalizing] gives a book, at best, a dated, Victorian feel, and at worst, an aura of irrelevance to modern readers.”

That’s worth thinking about—no one wants their work to be considered dated or irrelevant. It’s a solid argument for using lowercase for deity pronouns and advising our clients to do the same.

However, the decision does remain with the author (or publisher). As editors, the most important factor in any decision is consistency: we can refer to Jesus as He or he, Him or him, but we must choose one and apply that style choice consistently. Neither He nor he is incorrect but avoid using both.

What do you think? Do you capitalize pronouns referring to God or Jesus? Why or why not?

Iola Goulton of Christian Editing Services is a New Zealand-based freelance editor specializing in Christian fiction. Iola holds a degree in marketing and has been editing since 2012. She is a member of The Christian PEN, and Romance Writers of New Zealand, and manages the Beyond the Borders zone of American Christian Fiction Writers. When she’s not working, Iola is usually reading, writing her next book review, or avoiding working on her first novel. Iola lives in the beautiful Bay of Plenty in New Zealand with her husband, two teenagers, and one cat. Website: www.christianediting.co.nz or follow her on Facebook, Pinterest, Twitter.