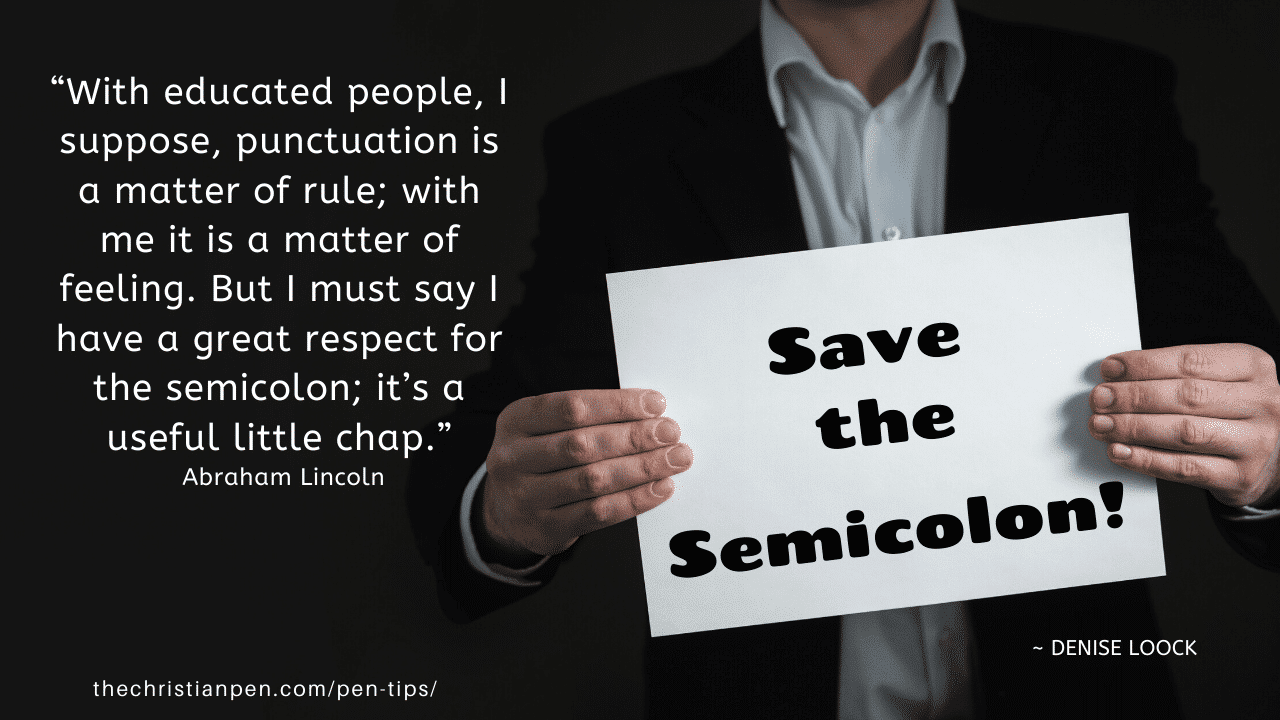 The semicolon awaits trial in global court. The indictment? Uselessness. If convicted, it will be exiled from the Land of the Written Word.

This grieves my heart.

Worldwide, writers and editors have denounced the semicolon. In its place they have sanctioned unthinkable replacements: Phrases and clauses masquerading as sentences.

Groups of words divorced from both subject and verb. The horror, the horror. And what about the twenty-first century writer’s infatuation with the single-word pseudo-sentence? Inexplicable.

I, on the other hand, come to praise the semicolon, not to condemn it.

No other punctuation mark has the semicolon’s ability to (1) connect independent clauses without compromising their individuality, (2) highlight the value of conjunctive adverbs, or (3) unsnarl a tangle of phrases and commas, then align them in readable lists.

What makes the semicolon a remarkable invention, however, is the nuances of meaning its presence heralds. The semicolon suggests a kinship between two independent clauses that distinguishes them from the crowd of sentences congregated in a paragraph. Without the semicolon’s assistance, the meaning of both thoughts would be diminished; therefore, it enables writers who appreciate its subtlety to craft more memorable sentences.

Example: Joy is not about praying for the sunshine; it’s about playing in the rain.

Semicolons also provide an air of expectancy at the end of an independent clause. They conduct a fluidity of thought that is blocked by a period and too forceful to be controlled by a comma. When savvy readers encounter a semicolon, they pause to examine the relationship between two thoughts. In this role, a semicolon acts as a grammatical selah.

Example: I waited in silence as he read; I knew better than to leave before I had been dismissed.

I close with three advisements:

Save the semicolon, fellow editors. It deserves both our protection and our patronage.

Denise Loock is an editor, author, and inspirational speaker. She is a general editor for LPCBooks, a division of Iron Stream Media. She also accepts freelance editing projects. She teaches two PEN Institute Courses and writes a grammar and usage column for Christian Communicator. She is the director of PENCON 2020.