Planning Can Make You a Better Editor 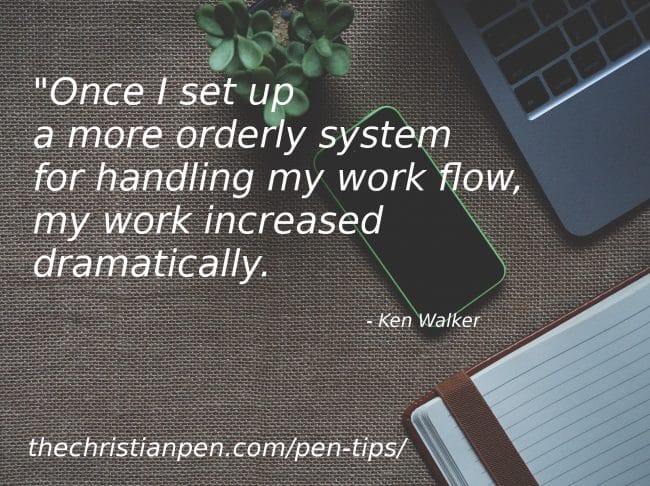 Once you pass age sixty, society seems ready to destine you for the scrapheap. Yet, I find that this decade is marking some of my finest work. It’s taken me years to get this far, and I’m not anxious to quit.

One reason I’m optimistic is the breakthrough I experienced three years ago, amid a serious decline in 2013 and few prospects on the horizon for the new year. Sometimes, perspiration can breed inspiration. I realized I needed to do a better job of scheduling my time.

Now, it wasn’t my brilliance that drove me to this awareness. I credit God for sparking prayer, deeper thought, and my plodding reflections. Everything combined to help me recognize that I had been letting a scheduling spreadsheet sit on my hard drive for more than a year, without doing anything with it.

Once I got my act together, work became more orderly. In the past, I jumped from assignment to assignment at a frenzied pace. In addition to writing articles, I often had a ghostwriting or book editing job, making things more frenetic.

Back then, I would have told you that I planned my days. Every morning I made a to-do list and treated it like my boss. But that was only half the battle.

More than fifteen years ago, I attended a writers conference featuring prolific author Dennis Hensley as the keynote speaker. I bought two of his books. One included a chapter on time management where Hensley said not only to make out a plan, but how long each project would take.

I tried that and felt as if someone was peering over my shoulder and demanding to know if I was on schedule. After a couple of days, I went back to my familiar to-do list.

Turns out Hensley was right.

I wish I had a better knowledge of Microsoft Excel years ago. Once I put it to use, it proved much better for planning. When I called up the spreadsheet I had downloaded during an online seminar, I discovered it was the perfect tool to help me map out my days. As Hensley advised, I estimated how long each project would take.

This accomplished two things: 1) It helped me determine how much time an assignment deserved, which kicked me into gear faster; 2) it enabled me to push projects to completion a step at a time. When I used to finish stories in one huge gulp, it left me emotionally drained and worried about other things I couldn’t get done that day.

Ironically, once I set up a more orderly system for handling my work flow, my work increased dramatically. It was as if when I did what I could do, then God did what only He could do.

Perhaps there’s a lesson in there for you. God is a planner. When we follow His design for making it through the day, our days will go better. 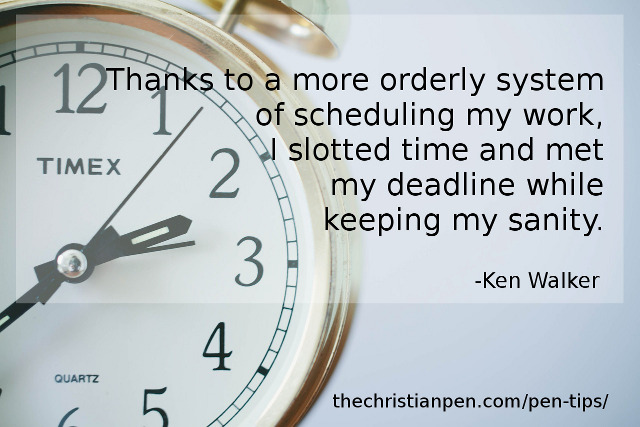 Although I didn’t intend for it to happen this way, I dashed off this blog post after spending a week out of town on a book project that is proving to be more rewrite than edit. The trip meant taking time away from a looming book-editing deadline.

In the past, that would also mean lapsing into sheer panic. Thanks to a more orderly system of scheduling my work, I slotted time and met my deadline while keeping my sanity.

This turnaround began in early 2014, after an extended slump in business. While it didn’t exactly happen this way, it was as if the Lord walked in and said, “So you had a bad (2013). What are you going to do about it?”

After thinking it over, I realized I needed a better way to track my many ghostwriting and book editing jobs. I opened up an Excel spreadsheet and listed potential or pending projects. Then, I noted when to call or e-mail co-authors, editors, and other contacts during the year.

However, a month later things were still slow. I realized that I needed to heed advice I had heard years before: to not just list projects but estimate how much time they should take.

So, I set up another spreadsheet and started planning my month. This did two things:

1) It allowed me to approach tasks on a more orderly basis.
Instead of trying to spend several hours completing the first draft of a challenging feature, I would schedule no more than two hours to start the story one day, and another hour or two the next. In two or three sessions, I could finish.

The month I started doing this, I learned the last person I needed to reach to finish a story would be in Florida for two weeks—without a cell phone. I wrote as much as I could, then scheduled that call later in the month. Not only did I get the story done on time, I turned it in two weeks early.

2) It enabled me to operate in a more businesslike manner.
A common weakness we creative types have is our sensitive, caring nature. That makes us better, more sensitive writers and editors. But it also leaves us vulnerable to abusers, pretenders, and people who think we should do this for free. If we fail to see ourselves as a business, no one else will either.

In addition, I sometimes get “Can you do this in two or three days?”-type inquiries. In the past, I often dropped everything to do such jobs. Now, I don’t automatically say “yes.” First I check my schedule to see if I have the time.

Lest I mislead you, I still fight feelings of being overwhelmed when facing multiple deadlines or wondering how to complete so many different tasks. Yet, because I am more organized than in the past, I’m more peaceful, too. And you know how much more productive you are when you’re not in a panic.