Turning That Sermon Series into a Book 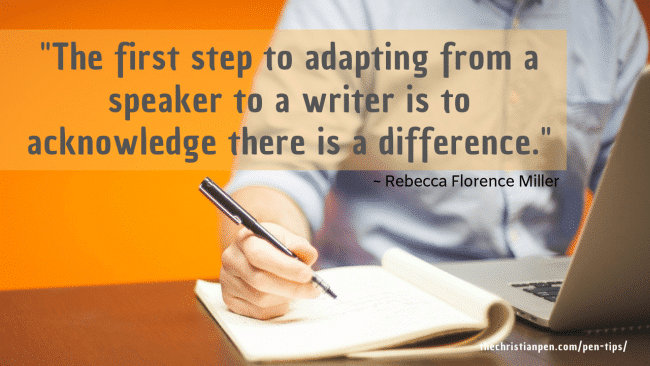 In my work as an editor of Christian nonfiction, I encounter many clients who are or have been pastors. While some pastors have a natural ability to transition from public speaking to writing, many struggle to do so. Sometimes pastors adapt a sermon series that their congregation has found meaningful, working it into a book manuscript. While the core idea of the series may have great merit, oftentimes I find such books suffer from insufficient development.

Pastors (and other people who do frequent public speaking) should consider the differences in communication mediums. Effective public speaking includes lots of repetition, a focus on big ideas rather than drilling down on details, a charismatic idiomatic style, and even the use of filler words as speech softeners. Finally, public speaking often reiterates values and ideas we already know but need reinforced and applied. Those aspects of communication are useful in public speaking but become stumbling blocks in the written word.

Effective writing does use some repetition, but it’s strategic, not constant. It takes big ideas and develops points and sub-points that support the big ideas in a convincing way. Good nonfiction should have a unique voice, but the voice of the writer should not overwhelm the content being communicated; the content is primary. Filler words and Christian clichés that worked in public speaking become awkward in prose. And sometimes the book a pastor wants to write has already been written. A pastor speaks to a captive audience each Sunday, but in book publishing, the pastor will need to know something about marketing and market placement. What makes this book stand out? Why would a reader who doesn’t know the pastor want to buy it? What does the book add to the conversation that is new or unique? Whereas public speaking can repeat and reinforce long-held convictions, a book should advance the thought beyond what is already known.

The first step to adapting from a speaker to a writer is to acknowledge there is a difference. Accept that you won’t be able to turn your sermon notes directly into a book. There will be hard work to shape the ideas you want to communicate into a new medium. This will mean writing and rewriting. It will mean bulking up main ideas, so they have more heft. It will mean removing unneeded words that you tend to repeat (especially most of those adverbs ending in -ly that add nothing new to your sentence!). It will probably mean working with an editor, someone who can give you an outside perspective.

If you don’t know where to start, the good news is that both the Christian PEN and the Christian Editor Connection can lead you to a great editor who can help you shepherd your big idea into a book.

God’s blessings as you write!

Rebecca Florence Miller is the content editor for Ministry Pass and an assistant editor with Truth For Life radio ministry; she has also edited for many clients, including Redemption Press, Baker/Brazos, and InterVarsity Press.

« Dear Editor: Where Do I Add a Comma? (Part Two) » Action Verbs Instantly Stimulate the Brain